Five New Reasons to Get Out and GO

over 80 beloved Pokémon that were originally discovered in the Johto region have appeared around the world. And new items, more rewards, and gameplay updates have come along with them.

Read on to learn why this is a great time to get out and have fun exploring the world with Pokémon GO. With new Pokémon to catch, new items to discover, and more Stardust, Candy, and XP available than ever before, there's never been a better time to be a Pokémon Trainer!

More Pokémon Than Ever in the Wild 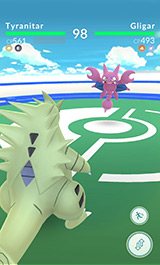 Whether you're looking to fill your Pokédex or hoping to catch your favorite Pokémon, encountering rare Pokémon is one of the most fun parts of the journey. Some exciting new Pokémon stand out among the rest.

The Rock- and Dark-type Pokémon Tyranitar and its prior Evolutions Larvitar and Pupitar may be rare to find, but the effort is worth it. Tyranitar is extremely powerful, and it also has type advantages against the popular Pokémon Espeon and Dragonite. Placing your Tyranitar in a Gym could make you the envy of your fellow Trainers!

Few Pokémon have the same sentimental value to Trainers as their first partner Pokémon, and now new partner Pokémon from the Johto region are waiting to be found. The Grass-type Chikorita, the Fire-type Cyndaquil, and the Water-type Totodile have all been spotted around the world, so keep an eye out for your favorites as you're exploring.

Several Pokémon, including Togepi and Pichu, can only be hatched from Eggs. Recently, we've heard reports of wild Togetic appearing, so perhaps there's an alternative to earning enough Candy to evolve Togepi. 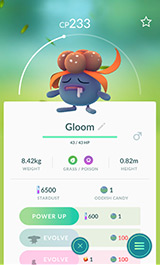 While you're seeking out the Pokémon originally discovered in the Johto region, don't forget to look at some of those you already have. There aren't just more Pokémon to catch—there are new ways for some to evolve, as well.

Several Pokémon you may have already caught are now able to evolve into Pokémon they couldn't become previously. For example, Golbat and Chansey can now evolve into Crobat and Blissey, respectively. To evolve them, all you need to do is collect enough of the corresponding Candy.

Some other Pokémon can also evolve in new ways, but they'll require a fresh approach. On rare occasions when you visit PokéStops, you may receive Evolution items that will help certain Pokémon evolve. The new Metal Coat item, for example, assists in the Evolution of Scyther or Onix. Gloom and Sunkern can evolve with the help of a Sun Stone, Porygon can evolve using an Up-Grade, Seadra can evolve with a Dragon Scale, and Poliwhirl and Slowpoke can use a King's Rock to evolve. These items are extremely rare, so keep visiting those PokéStops. If you collect items from PokéStops every day, you'll be guaranteed one of these special Evolution items each time you complete a week-long “First PokéStop of the Day” streak.

Eevee can now also evolve into two Pokémon introduced in the Pokémon Gold and Pokémon Silver games—Espeon and Umbreon. In those earlier games, Eevee could evolve into Espeon during the day or into Umbreon at night. Perhaps you could form a special bond with an Eevee that has traveled with you as your Buddy Pokémon for a great distance...

Before they can evolve, each of these Pokémon will still need enough Candy in addition to their other requirements. Keep catching as many Pokémon as you can so you'll be ready when the time comes. 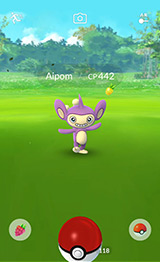 Berries can help you get the most out of your encounters with wild Pokémon. Pinap and Nanab Berries join Razz Berries as items you can collect when visiting PokéStops. Note that you'll be able to feed a wild Pokémon only one Berry at a time.

Feeding a Pinap Berry to a wild Pokémon doubles the amount of Candy you'll receive should you capture the Pokémon the next time a Poké Ball finds its mark. Pinap Berries are a great way to stock up your Candy reserves, especially for rare species you don't encounter in the wild too often. Be mindful about using Pinap Berries on Pokémon that are difficult to capture, though; they won't make the Pokémon any easier to catch.

Nanab Berries, by contrast, make Pokémon easier to target by calming them down. This will make the Pokémon's movements less erratic as it attempts to evade capture. If you're struggling with a tricky Pokémon that keeps zigging and zagging around your Poké Balls, a Nanab Berry might be just the ticket. Using these Berries can help you conserve Poké Balls by making it easier to connect with your throws.

Don't forget to keep up your supply of Razz Berries, though; they're still the best way to maximize your chances of capturing a specific Pokémon. It won't help you save Poké Balls like a Nanab Berry or give you extra rewards like a Pinap Berry, but a Razz Berry's success will be just as sweet when you really need to catch a particular Pokémon.

A Quicker Route to Filling Your Pokédex

With all the new Pokémon wandering around, it might feel daunting to catch up to your friends if you haven't already captured most of the Pokémon originally discovered in the Kanto region. Take heart—it's never been easier to fill out your Pokédex. The new Pinap Berries can be incredibly helpful with Pokémon that need a lot of Candy to fully evolve, such as Dratini, Oddish, and the first-partner Pokémon. By saving Pinap Berries to catch up on Evolutions you may be missing, you'll be level with even the most ambitious Trainers in no time.

There aren't just additional Pokémon available—there are plenty of other improvements to Pokémon GO that are sure to make your adventures more fun. 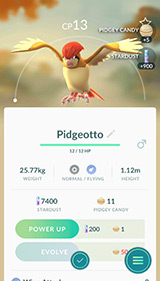 Catching evolved Pokémon poses an extra challenge, so some Trainers may have avoided additional encounters with tricky Pokémon like Beedrill, Pidgeot, or Golbat after initially registering them in their Pokédex. We'd suggest you give catching these Pokémon another shot, because now with greater challenge comes greater reward.

When you catch an evolved Pokémon, you'll receive additional Candy and Stardust. For instance, an Ivysaur will now award you 300 Stardust instead of the normal 100 after being captured, and five Bulbasaur Candies instead of three. And if you were lucky enough to encounter a Venusaur in the wild, capturing it would net you a cool 500 Stardust and 10 Bulbasaur Candies. Better yet, the Candy bonuses stack with the effects of Pinap Berries, so you could potentially earn 20 Candies from a single capture.

Skilled Trainers may find they're getting even more XP thanks to another new bonus. If you catch a wild Pokémon with the first Poké Ball you throw, you'll earn some additional XP. Note that the Pokémon GO Plus attempts to throw only one Poké Ball at each wild Pokémon, so you'll always receive this bonus if the accessory successfully captures a Pokémon. The extra XP makes leveling up even faster, especially when stacked with the effect of a Lucky Egg.

If you haven't searched for Pokémon recently, you may be surprised to discover that you now receive a bonus for the first Pokémon you catch and the first PokéStop you visit each day. These bonuses will increase as you catch Pokémon and visit PokéStops on consecutive days until the seventh day, when you'll receive a big bonus as the streak resets. This can be one of the most reliable ways to get the rare items needed to help evolve Pokémon, so try to get out and visit PokéStops every day. 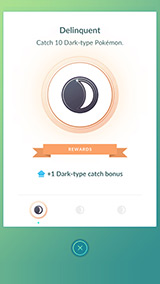 Dark-type Pokémon have started to appear, and with them comes a new medal for Trainers to earn. Every time you level up your new Delinquent medal by catching enough Dark-type Pokémon, your catch bonus for Dark types will increase. There's still not an abundance of them out there, so be sure to catch all the Murkrow and Sneasel you can find to improve your odds of capturing that extra-large Tyranitar when the time comes. Plus, keep a lookout for Swinub to help complete the tricky Skier medal for capturing Ice-type Pokémon.

We hope you're enjoying your adventures catching Pokémon originally found in the Johto region. So, GO on out there and start throwing Poké Balls, Trainers! Remember to check back at Pokemon.com/Strategy for more Pokémon GO, video game, and Pokémon TCG tips.