We continue our look at some of the awesome Pokémon-GX and TAG TEAM Supporter cards from the latest Pokémon TCG expansion.

Anew Pokémon Trading Card Game expansion has arrived, and with it comes a bevy of wonderful new cards. Sun & Moon—Cosmic Eclipse is chock full of incredible Pokémon, powerful Pokémon-GX and TAG TEAM Pokémon-GX, and two new TAG TEAM trios. The expansion also marks the debut of TAG TEAM Supporter cards—after all, why should Pokémon Trainers be left out of the TAG TEAM action? Check out some of the awesome cards you'll find in the Sun & Moon—Cosmic Eclipse expansion! 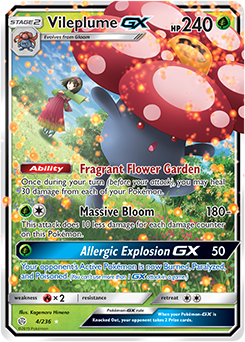 Gym Leader Erika (who makes a cameo appearance on this card) knows that whenever you bring a Pokémon into battle, you want to keep it from taking damage. This is especially true in Vileplume-GX's case—its Massive Bloom attack normally does 180 damage, but it becomes less effective if Vileplume-GX has taken any hits. For each damage counter on the Pokémon, the attack does 10 less damage. Luckily, this is offset by Vileplume-GX's Fragrant Flower Garden Ability, which allows you to heal 30 damage from each of your Pokémon before your attack. If you need to dish out some more damage as revenge, don't forget the Allergic Explosion-GX attack. It only does 50 damage, but it also leaves your opponent's Active Pokémon Burned, Paralyzed, and Poisoned, so you can cause some lingering harm.

Speaking of special appearances by Pokémon Trainers, check out the determined Lillie riding Solgaleo into battle on this card featuring Solgaleo & Lunala-GX! When these two Legendary Pokémon join forces, you know they're going to make a powerful team. This TAG TEAM's Cosmic Burn attack has a high Energy requirement (three Psychic Energy and one Colorless Energy), but it does a whopping 230 damage. The only caveat is that the TAG TEAM can't use the attack again during your next turn. Perhaps you can follow up with Light of the Protector-GX, which does 200 damage. Plus, if you play the Supporter card Lillie's Full Force during the same turn, you protect all of your Pokémon from all effects of attacks—including damage—done during your opponent's next turn. 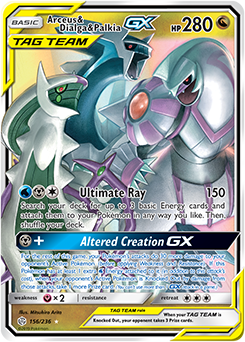 If you want to give yourself an advantage in battle, use Arceus & Dialga & Palkia-GX's Altered Creation-GX attack as soon as you can. This attack causes all your Pokémon's attacks to do 30 more damage for the rest of the game—a little oomph that can really spell trouble for your opponent. If you enhance the GX attack by attaching an extra Water Energy, you'll also be able to claim 1 more Prize card whenever you Knock Out your opponent's Active Pokémon with these boosted attacks! This TAG TEAM trio's Ultimate Ray attack is pretty useful as well. In addition to doing 150 damage, it lets you search up 3 basic Energy cards from your deck and attach them to any of your Pokémon. 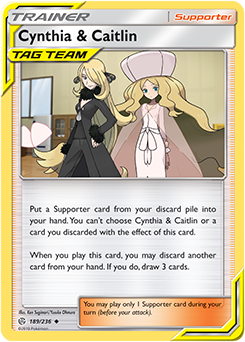 Like other TAG TEAM Supporter cards, Cynthia & Caitlin has two different effects when you play it. This particular card is especially useful if you need to get more cards in your hand. The first effect lets you return a Supporter card from your discard pile to your hand, as long as it's not another Cynthia & Caitlin card or a card that you've discarded as a result of this card's other effect. That second effect lets you draw 3 cards if you first discard another card from your hand. Not a bad way to bolster your hand while bringing another valuable card back into the match. 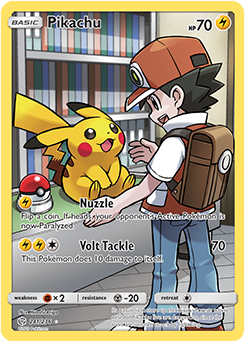 Yeah, OK, this Pikachu isn't exactly a heavy hitter. Nuzzle requires a coin flip to have any effect at all—even then, it does no damage, just leaves the opponent Paralyzed—and the Volt Tackle attack does a bit of damage to Pikachu every time you use it, but c'mon. LOOK AT THIS CARD. It shows Red meeting Pikachu for the first time in Professor Oak's lab! It's a wonderful illustration. And hey, if you're running Raichu (whose Powerful Spark attack could end up doing some significant damage if your deck relies on Lightning Energy), this card is an adorable way to get it into play.

Want to take control of your opponent's Pokémon? If Venusaur & Snivy-GX is your Active Pokémon, its Shining Vine Ability allows you to pull one of your opponent's Pokémon off the Bench and into battle when you attach a Grass Energy to the mean, green TAG TEAM. This sets them up for your next move, which could be the pair's Forest Dump attack for 160 damage. If you want to spread around some damage, the Solar Plant-GX attack does 50 damage to all your opponent's Pokémon. With an extra 2 Energy attached, the team bonus effect will even heal all damage from your entire team!

The fiery TAG TEAM of Charizard & Braixen-GX can help you cause a lot of damage while getting the cards you need into your hand. At a cost of four Energy, the pair's Brilliant Flare attack does an impressive 180 damage while also letting you search your deck for up to 3 cards to add to your hand. You'll soon have everything you need ready to go! You can then quickly energize any Pokémon you bring into your hand with the Crimson Flame Pillar-GX attack, which lets you attach 5 basic Energy cards from your discard pile to your Pokémon. It also has the bonus effect of making your opponent's Active Pokémon Burned and Confused for the cost of just 1 extra Energy. 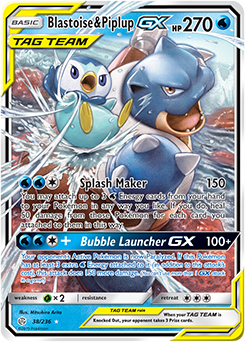 Splish, splash, your opponent will be taken aback when you bust out this TAG TEAM! Blastoise & Piplup-GX's Splash Maker attack will certainly live up to its name by hitting your opponent's Active Pokémon for 150 damage and letting you attach 3 Water Energy cards from your hand to your own Pokémon. Not only that, but each card you attach also heals 50 damage from the Pokémon you attach it to! You can then rain damage down on your opponent with the Bubble Launcher-GX attack, which does 100 damage and makes your opponent's Active Pokémon Paralyzed. Tack on 3 extra Water Energy, and the GX attack does a massive additional 150 damage. 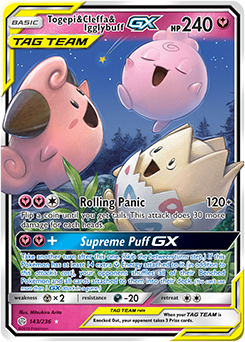 One of two TAG TEAM trios in the Sun & Moon—Cosmic Eclipse expansion, Togepi & Cleffa & Igglybuff-GX has a couple of very interesting attacks. Its regular attack, Rolling Panic, does a base 120 damage, but then you get to flip a coin until you get tails. The attack then does 30 more damage for each heads. If you get a lucky streak going, this attack can be incredibly damaging! On the other hand, the trio's Supreme Puff-GX attack doesn't do any damage, but it can put your opponent in a bad situation. For just two Fairy Energy, the GX attack allows you to take an extra turn. But if you have 14(!) extra Fairy Energy attached, your opponent must shuffle all their Benched Pokémon and all cards attached to them back into the deck. Good luck recovering from that tinypocalypse!

It wouldn't be a TAG TEAM card without a team bonus, right? Each new TAG TEAM Supporter card comes with a bonus effect that you can activate by discarding other cards from your hand when you play it! Red & Blue shows off two famous Trainers joining forces on a card that lets you search your deck for a Pokémon-GX that evolves from 1 of your Pokémon in play and immediately evolve it. If you discard 2 other cards from your hand when you play Red & Blue, you can search up 2 basic Energy cards and attach them to that newly evolved Pokémon-GX right away. They may be rivals, but Red and Blue can work together to make sure your powerful Pokémon are ready for battle. 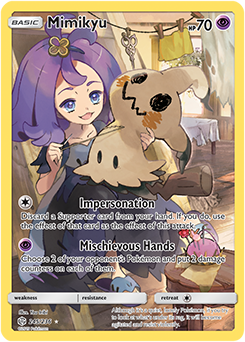 Supporter cards can be extremely useful, but wouldn't it be great if you could play more than one of them per turn? Well, Mimikyu's Impersonation attack pretty much lets you do just that! For the cost of one Energy (of any type), you can discard a Supporter card from your hand and use the effect of that card as the attack. What this means is that you can play a Supporter card during your turn and then effectively play a second as your attack at the end of your turn. This could be especially useful early in a match, and really, how could you not want a card as adorable as this in your deck?